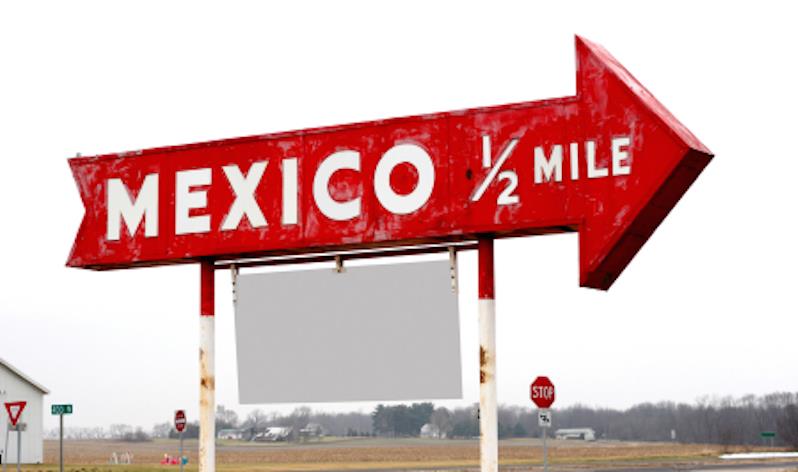 It was a cold dark morning and somewhere out in the Sonoran desert the Tres Estrellas de Oro bus I had boarded hours earlier in Tijuana came to a halt, the motor switched off. It was 2:30 AM.

As the only gringa onboard, I had to exit the bus, alone, and go into an immigration office; a rickety wooden shack big enough to fit two desks and folding chairs. Inside the shack, two disheveled, yet intimidating Mexican immigration officers sat like vultures waiting for something to happen. I stumbled off the bus, my heart thumping. This is it, I thought; I’ve been caught.

It was 1968. I was 16 and running away from home. With suitcase, sewing machine and two guitars in tow, I was headed to Guadalajara to become a child bride. Back home in Studio City, my mom was realizing I was gone. I was the last of four siblings living at home; my rebellious nature was wearing her down.

That previous summer, she had sent me to study at the School of Fine Arts at the University of Guadalajara, where I met Oscar. Magic was in the air with muralists up on their scaffolding, sculptors welding abstract forms in the garden, and folklórico dancers kicking up dust in the central patio; the thought of returning to the San Fernando Valley – the place where I’d grown up – depressed me. I, a precocious and rebellious teen, was a misfit and needed room to breathe and grow. The linear grid of the San Fernando Valley stifled me; the orange groves turned into track homes felt sterile. My classmates at the time were heavily influenced by the drug scene and frequently dropped LSD before attending classes. I preferred boys. But sneaking out my bedroom window at night to meet up with friends, mostly guys, was no longer an option; I kept getting caught and grounded. Being a good little girl never came easy. The friction between my mom and me became unbearable.

Earlier that day, I barely passed the scrutiny of the American immigration officials. Their questions came at me like machine gunfire. How old was I? Why was I alone? Where was I going? Why Guadalajara? Who did I know there? Had I visited before? I bluffed my way through, using my sister’s name. She was twenty-five at the time. I had come across her birth certificate just before leaving Los Angeles and had brought it with me just in case. When the U.S. officials emptied the contents of my purse and came across a letter from Oscar addressed to me, it prompted them to question why I had two different first names. The thought of being caught and sent back made me sweat and shake. My voice quivered as I lied. But they let me through and I made my way across the border into Tijuana where Oscar was waiting for me.

At this point my mom had hired a detective to look for me. He had been an L.A. cop, trained to find runaway kids. He failed to come up with any leads since I misled them by leaving clues on our phone bill so they’d think I went north instead of south. I also created a fake diary, purposefully left behind with notes about how much I desired to go up to San Francisco. It was the late 60s when the counterculture movement was in full swing. It never occurred to my mom or the detective that I’d do something as crazy as crossing the border illegally, risking so much just to go back to Mexico.

But my friend Kathy, who I’d met in Guadalajara was still in L.A. visiting her mom, and she became an accomplice to my getaway. I was grateful she could translate the letters from Oscar; his English was worse than my flawed Spanish. So I communicated with my husband-to-be through an interpreter and thus we knew little about each other. We had no clue if we shared common interests or basic values. There was very little time to become acquainted with each other’s quirks and habits. Nor was our nine-year age difference a consideration.

That day in mid-September, Kathy showed up just as planned. She picked me up from North Hollywood High in her rickety VW bug, just 15 minutes after my mom had dropped me off. It was meant to be my first day of high school. I never stepped foot on campus. From there she dropped me at the house of another friend, who drove me to the border two days later.

While some girls my age were preparing for their Sweet Sixteen parties in frilly dresses, I was planning an unlawful international border crossing.

For me, the experience standing in that ramshackle immigration hut was a turning point; a symbolic passage into maturity while still a child. I had fast-forwarded into an uncertain future, assuming I’d be better off once I escaped the Valley and a home where I felt invisible. I replaced one challenging home life for another. I married an alcoholic Mexicano, who I later discovered was gallivanting around with other women as I grew plump and pregnant.

Four months later, while in my third month of pregnancy, I called my mom to let her know where I was. With raised voice, but relieved I was alive, she asked, “How could you have done this to me. We thought you were dead. Where did I go wrong?” But she was a pragmatist, something I later came to admire, and asked me what I wanted to do. “Get married to Oscar and have the baby,” I replied. I needed her written permission to do so since I was a minor. She agreed, though she wanted more than anything for me to come home and put the baby up for adoption, a common option during that time. On July 21, 1969, during my eighth month of pregnancy, Oscar and I were married. At that moment, Neil Armstrong was stepping foot on the moon; our guests arrived three hours late.

Later I learned the Catholic Archdiocese in Guadalajara had phoned the local Catholic Church in Studio City. They were able to locate my mom through my cousin, who had coincidentally celebrated her wedding there; they wanted to alert her that I was in Guadalajara. The preparation for my wedding in the Catholic church, required taking catechism classes with an American priest who taught theology assuming I was a university grad student, not a 16-year old high school drop out. I guess I blew my cover. They were double-checking to confirm the legitimacy of my written permission to marry.

So, there I stood before the Mexican immigration officials that next morning after crossing into Tijuana. I turned and looked back. People on the bus, including Oscar, were staring at me. When the officers mumbled “Tarjeta de turista,” even with my limited Spanish I understood. They pushed a pen toward me. I quickly forged my sister’s signature, my hand shaking uncontrollably. That signature – which looked more like chicken scratch – stayed imprinted on my psyche. The fear of crossing borders haunted me; that shack in the middle of nowhere lingered for years, no matter where I travelled in the world, or which border I was crossing.

But the officers barely noticed, and could not have cared less. They just wanted to go home.