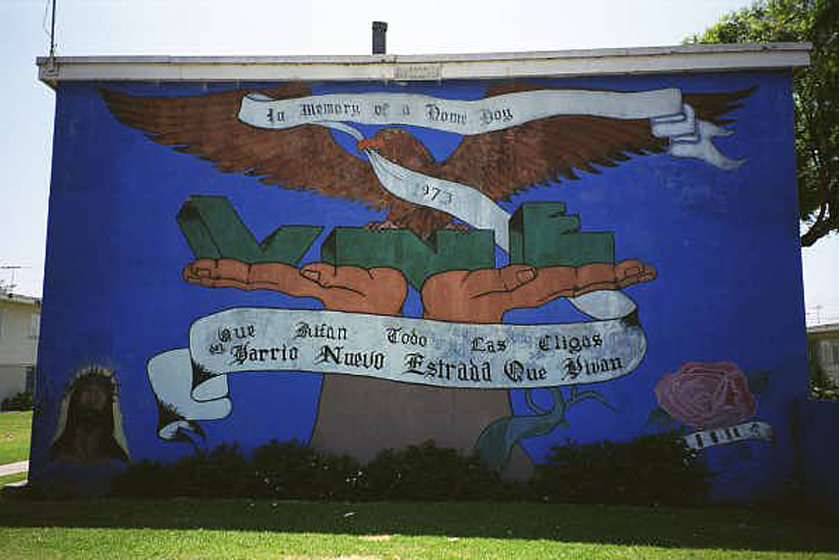 In the summer of 1973, I was one of the kids who painted the mural in the Estrada Courts housing project in honor of the gang I belonged to, Varrio Nueva Estrada.

That was my last summer in the varrio before my enlistment.

Varrio Nueva Estrada had formed thirty years before by guys who lived in the project in the 1940s. By the 1970s, VNE was very large, one of the largest gangs in East L.A. It included several cliques. Mine was the Dukes. I was 18 years old and the first gang member in my family. I never knew my father. My oldest brother was my father figure. He painted furniture at a factory and was fifteen years older than I was. He was an alcoholic and a very prideful man. His pridefulness must have rubbed off on me. Anyway, my mother used to worry a lot about me. There was a lot to worry about. The gang was like my family. I felt I needed to protect my family at all costs. At the time, the varrio was something I would die for.

The mural that summer was funded by the county, which wanted to beautify the East L.A. area. The fire department donated the paint and the Kiwanis Club lent us the scaffolds. A mural was better than graffiti, they figured, and the neighborhood artist proposed a mural that no one would deface with graffiti. It turned out to be a mural showing how long VNE had been there and how long we were planning on staying. It was pride in the neighborhood, meaning the varrio, the gang.

People who didn’t belong to the neighborhood didn’t have any business in the projects – that’s how we felt. We viewed the mural as a statement to other gangs to stay out; that this is VNE headquarters – all of it funded by the county.

About a hundred homeboys worked on that summer youth program, and the VNE wall mural was the first one approved. After it was finished, other murals were painted. Murals went up in the Maravilla projects, the Hazard projects, in Primera Flats – all on county property with county funding. They all did the same thing we did, which was to glorify our neighborhood, our gang.

The mural takes me back to that summer of 1973. I was drinking a lot and I used to get high on reds and whites. I smoked marijuana a lot, too. I was a follower and I needed to fit in. I got picked at random to help out on a crew of five painters. None of us were artists, but it made a lot of us feel good for a change. The artist, named Danny Martinez, directed us, telling us which colors to paint where. He had the whole mural outlined in chalk.

The mural is of two hands growing from a tree stump and holding up the letters V-N-E, atop which stands an eagle with a ribbon proclaiming the mural “In memory of a Home Boy. 1973” – all against a royal blue background.

Back then, gang killings were much less common than they became a couple decades later, and we rarely used guns. One night in 1973, though, we got invited to a party in the Florencia area. One of our homeboys was a kid named Noely who lived a few blocks from Estrada Courts. His parents were Russian immigrants, but he spoke Spanish, grew up with us – a white guy and a member of our gang. He was shot and killed at the party. That set off big problems between us and Florencia for many years.

For a month I worked on the mural, painting its blue background and the ribbon across the top. I painted with great care, thinking that it had to be perfect so that the rest of the mural could look nice.

Many years later, I talked to Danny Martinez, who drew the mural. He explained that the tree stump represented the years that the varrio had been in the projects. Like a tree, the varrio had grown. The hand represented how we were holding up the varrio to glorify it. The eagle was showing the Chicano struggles in the late 60’s and early 70’s. And the ribbon was dedicated to Noely.

Many younger homeboys were on crews that painted those murals. One who became infamous was Ernie “Chuco” Castro. He was about 13 years old at that time, getting high on reds and whites.

The year before the mural, I was arrested for possession and suspicion of sales, so I was on probation when I turned 18. That year, I was beating up a kid in a park and cops arrested me. I was facing my first felony and my probation officer recommended me to the military. So a few months after helping paint the VNE mural, I enlisted in the Army, which turned me around. When I came back in 1977 I was military minded. I moved out of the varrio with my wife.

Later, after I moved away, I remember meeting Chuco’s ex-wife, Jackie. She told me that Chuco was doing some time and they had kids already. He’d been doing heroin by then. Heroin was like an epidemic in East L.A. at the time. A lot of guys into heroin were doing a lot of robberies. I think Chuco got caught up in that.

But I missed it. I was working, driving trucks in the 48 states. So I lost contact with many homeboys. I was no angel. I’d drink heavily for a while. I smoked PCP for a couple years, and gambled.

Then 27 years ago, I just stopped it all. The blackouts got to be too much. I’d come home from the racetrack with nothing. I lost a wife over it. Since then, I’ve been clean, driving trucks, and working on older cars. My second son is getting a PhD in English in New Mexico, so I’m happy about that.

I don’t get over to see the mural too much any more. But when I do, I feel lucky to have gone to serve in the 82nd Airborne Division. I could have ended in prison, or been killed at the rate that I was going. I was sly, sick and wicked and got away with a lot of crimes. I got shot at a couple times, but they missed.

I still run into a few of the homeboys from time to time. One guy, name of Ciclón, was a pretty bad dude then. Now he’s got a bad back. He told me about Chuco. Chuco, he said, had been doing some work for the carnales – the Mexican Mafia. He became a made member. Then, a few years later, he was arrested and, facing life, Chuco became an informant. He testified in a famous case that sent many of the carnales to prison for life.

In The Company of Memories