The History of Bruce’s Beach

On July 20, 2022, the County of Los Angeles Board of Supervisors returned ownership of Bruce’s Beach to the closest living legal heirs of Charles and Willa Bruce.

This effort follows a more than year-long process that began in April 2021 when Los Angeles County Supervisors Janice Hahn and Holly Mitchell announced their intention to have Los Angeles County return the beachfront property once owned by Charles and Willa Bruce to their legal heirs. Their property was taken from them by the City of Manhattan Beach in an act motivated by racism and a desire to drive out a successful Black business and its patrons.

In 2021, the LA County Board of Supervisors initiated a process of returning the land to the descendants of Willa and Charles Bruce. Click here to
learn more about these efforts.

With the goal of creating a space for Black Angelenos to visit the ocean during a time of beach segregation, Willa Bruce purchased Lot 8 of Block 5, on this site, in 1912. Willa told the Los Angeles Times, “Wherever we have tried to buy land for a beach resort we have been refused. But I own this land and I’m going to keep it.” On June 17, 1912, she and her husband, Charles, opened a portable cottage offering refreshments, bathing suits, and changing areas to the public. The popularity of the Bruces’ resort increased, drawing hundreds – and, at times, thousands – of Black visitors to the area. By the summer of 1916, the Bruces replaced their portable cottage with a two-story structure that included changing rooms, a dance hall, and restaurant.

Inspired by the Bruces, other Black families purchased land in the surrounding area and built cottages and vacation homes, creating a summer community for Black Angelenos. This included veteran Buffalo Soldier Major Reverend George W. and his wife Mrs. Ethel Prioleau, who purchased the southern half of Lot 4, Block 12 in 1919. The northern half was purchased by Ms. Elizabeth (Emma) M. Patterson in 1922. Together, they built a duplex, which was moved to another location in 1925 and still stands in Manhattan Beach today. In 1923, caterer Mrs. Mary Sanders bought Lot 6, Block 12, and Mr. and Mrs. Milton B. and Anna E. Johnson purchased Lot 1, Block 12. 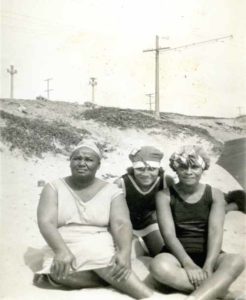 Willa Bruce with her daughter-in-law, Meda, and sister at Manhattan Beach in the 1920s. Photo Courtesy of the California African American Museum. Advertisement in the California Eagle, April 29, 1916 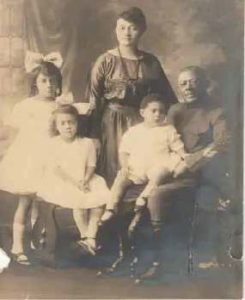 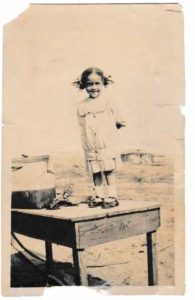 Mary Ethel King (1930-2014), daughter of Mary Prioleau and Ralph King, first Prioleau grandchild, standing on a table with Prioleau. Manhattan Beach cottage in the background, circa 1932. From the files of Mary King, courtesy of the Prioleau-King family. 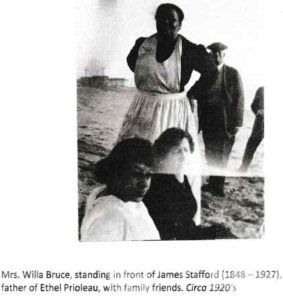 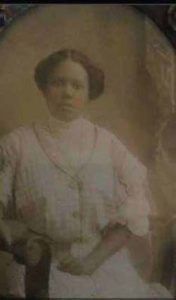 Harassment of the Bruces and their guests by some White neighbors occurred immediately after the resort’s opening in 1912. “No Trespassing” signs were posted on the adjacent beach owned by subdivider George Peck, and visitors were confronted by deputy constables warning against crossing the strip of land in front of the Bruces’ property to reach the ocean. Black beachgoers were undeterred, walking half a mile to swim and enjoy the water.

Some White citizens viewed the influx of Black landowners as a “Negro invasion” and feared for their property values. The City’s Board of Trustees unanimously passed an ordinance to acquire land owned by the Bruces and four other Black families to create a public park in 1924. This included a total of 30 lots, of which only five – owned by Black citizens – had homes or cottages built upon them.

In a February 4, 1927 letter to the Manhattan Beach News, the Bruce family wrote to the community: “… the attempt to make a park out of these two blocks was a direct slap at us because we were not born [W]hite people.”

The condemnation proceedings were argued in front of the Los Angeles Superior Court, which ruled in favor of the city, forcing all owners to relinquish their properties in exchange for a court-approved settlement. Four of the five Black families with condemned properties relocated elsewhere in Manhattan Beach, but the Bruces did not. According to their descendants, they left after the exhaustive legal proceedings and the escalating racial tensions in the community. 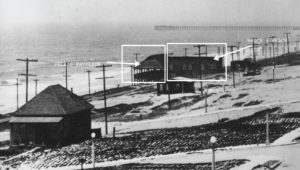 Looking north/northwest from Marine, circa 1916. Peck’s Pavilion is on the beach, west of the Strand, and the Bruces’ resort was on the eastside of the Strand. The pier in the distance is the Standard Oil Pier and the pilings in the near background are what remained of Peck’s Pier. Courtesy of the Manhattan Beach Historical Society. One week after Bruce’s Beach closed, James and Lula Slaughter opened a boarding house on 26 Street, opposite the condemned area. Advertised in the California Eagle as “Formerly Bruce’s Beach,” accommodations were open to the Black community.

The same month, the Board of Trustees entered an agreement with local businessman, Oscar Bessonette, to “lease” the beach between the Strand and the Pacific Ocean, rendering it private property. According to the Los Angeles Times, the lease was an “aid to keeping out undesirable visitors.” Bessonette placed “No Trespassing” signs on the beach, subjecting violators to arrest.

On July 17, 1927, the Los Angeles chapter of the NAACP organized its first peaceful protest. Chapter president Dr. Henry Claude Hudson led a “swim in” and four protestors were charged with resisting an officer. At trial, Bessonette testified that the actual intent of the “No Trespassing” signs was to keep “Colored people” off the beach.

The court ruled against the protestors, but on appeal, the decision was overturned. The City of Manhattan Beach canceled its lease with Bessonette. The NAACP’s actions and court decision set a precedent that would forever discourage private exploitation of the Manhattan beachfront.

In the immediate aftermath of the trial, violence against Black residents increased. On the night of October 18, 1927, hooded individuals allegedly approached the Slaughter residence and set the gas meter aflame. Venice Evening Vanguard reported, “Dynamite, bullets and the secret torch are all alleged to have been employed by residents in order to induce the [N]egroes to travel. Certain citizens objected to a colored settlement.”

In February 1928, Los Angeles newspaper The Record reported that the Los Angeles District Attorney’s office had launched an investigation into the violence, adding that the situation had “grown to the proportion of a race war.” Ultimately, the 1928 Grand Jury did not pursue any formal indictments. 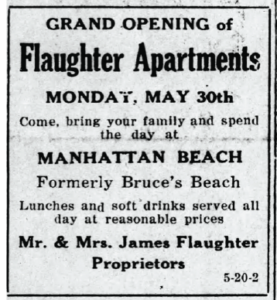 California Eagle ad for the opening of the Slaughter Apartments. “Flaughter” was a paper misprint. May 20, 1927. 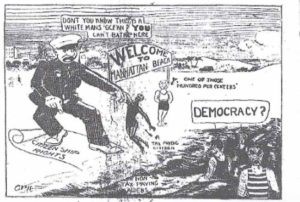 Political cartoon regarding the beach scandal from the California Eagle, July 17,1927.

In May 1927, the City of Manhattan Beach entered into a sham lease that privatized the local beachfront from the Pier to the north. “No Trespassing” signs were installed, but only enforced against Black beachgoers. Following a series of arrests and harassment by City Officials, NAACP Los Angeles Chapter President, Dr. H.C. Hudson along with John McCaskill, J.H. Conley and Romalious Johnson staged an act of civil disobedience when they refused to leave the beach when confronted by police officers. During their trial it was revealed that the private beachfront was aimed at Black visitors only and therefore illegal. With Hugh Macbeth as their lawyer, the men appealed and the charges were dropped. The beach was again open, setting a precedent banning privatization of the beach. California Eagle, Friday, August 19, 1927. 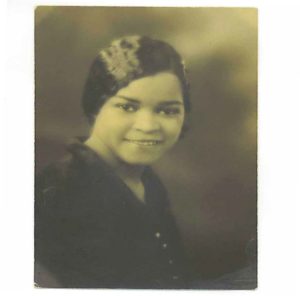 In 2006, the entire condemned area was officially named Bruce’s Beach and dedicated on Saturday, March 31, 2007. The Bruces’ grandson Bernard Bruce told the crowd, “This is a happy day for my family and me. It is a happy day for Southern California, for African Americans, for the whole country. We are remembering our past.” Charles and Willa Bruce on their wedding day, Albuquerque, New Mexico, circa 1886. Courtesy of the California African American Museum. 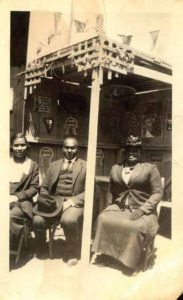