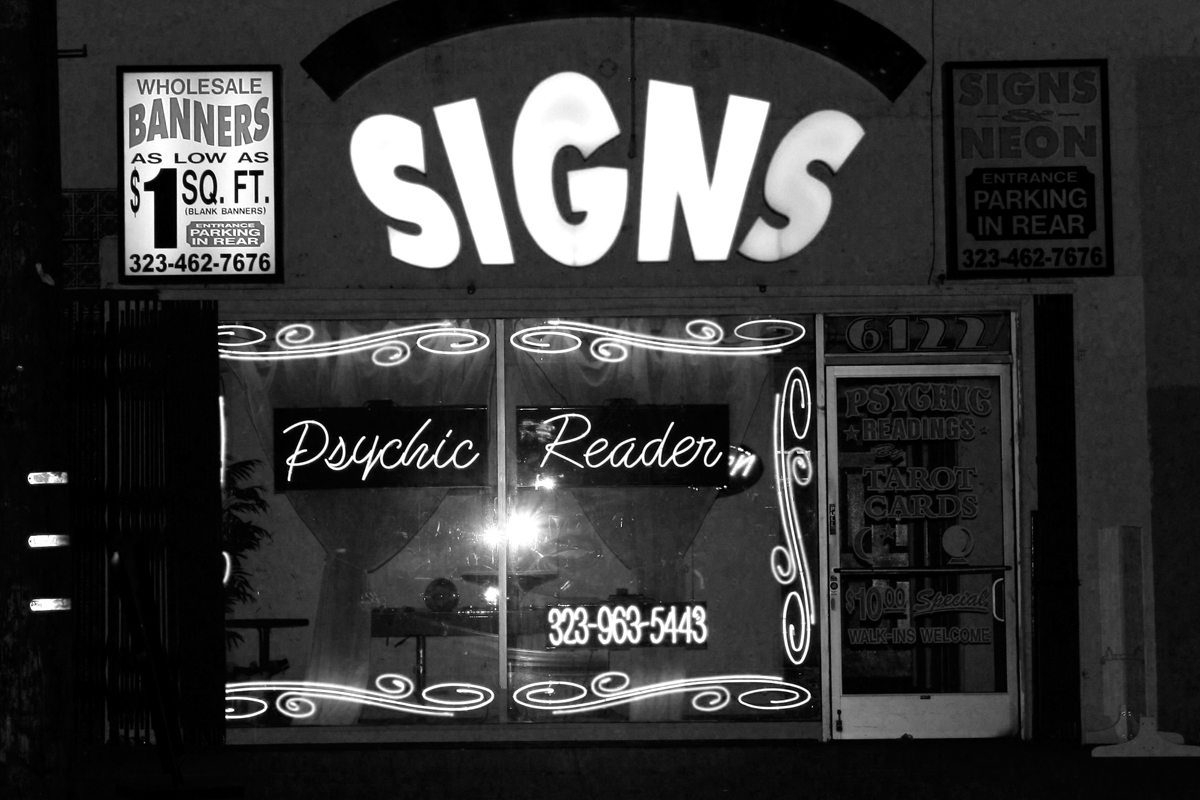 Street vendors, food stands, and nightly dances were what they were raised on back in Mexico. Ivette lived in Northeast Los Angeles, and visited her sister occasionally. The two would go shopping in the miniature strip malls and boutiques and dine at the mom and pop restaurants.

One Saturday afternoon, the two sisters were walking through downtown Fontana looking for some fun. They were both in their early twenties, and although they were married, they enjoyed being independent.

That day, they came across a psychic’s shop. Alchemist suns and moons hung inside the shop’s mirrored façade. The strong and pleasant smell of incense greeted them at its doors. A hand painted sign announced that they could have their palms read for ten dollars.

They stepped inside. Candles lit the store. Diagrams of human hands were framed on the walls. At the center of the shop was an altar to “La Santa Muerte,” a spirit known as the Lady of the Holy Death, and who in Latin culture has become a saint to some, and an evil spirit to others.

They were greeted by a middle-aged man. His name was Marcos Uribe, and he claimed to be a spiritual reader from Central America.

Marcos read palms, predicted futures through tarot cards, and did spiritual cleansings with herbs and natural elements to fight off evil spirits who haunted unfortunate victims. Ivette had her palm read first, and Marcos told her of her personal and spiritual life. Then he moved on to Maria. He spoke to her kindly. She was weak spiritually, he said. He did not provide many details, but my aunts in the end were content and moved on. They left the shop and that night Ivette returned to Los Angeles.

Maria lived with her husband, Hector, in a two-room apartment, and she would remain home alone throughout the afternoon and night when he was at work in a welding factory.

She noticed small fingerprints on the furniture. She was certain they weren’t hers, and they seemed to be those of children, which she didn’t have at the time. She wiped them off and continued with her housework. But they continued reappearing. She went to sleep, assuming her mind was playing tricks on her. Things got worse.

She slept alone for a few hours, as she always did when her husband worked nights. But she sensed an immense amount of unnatural activity around her. The bed shook throughout the night, and the door opened and closed. By now she was truly afraid. She tried to get to sleep and eventually did, but awoke with nausea the next morning.

That morning, Hector went out to buy her medicine. The nausea had come unexpectedly, and she wondered what was responsible for it. After cooking and cleaning, she spent most of the afternoon talking with neighbors. Her nausea had faded by then, but the sense of something disturbing lurking in the apartment had not. She believed it was all in her head, and had forgotten her visit to the palm reader.

Night came, and as she went to bed, she made sure to lock the bedroom doors. She left the radio on to provide comforting background noise and went to sleep. A few hours later, she woke to an intense shaking of her bed. Then everything began spinning uncontrollably. The room became cold, and my aunt felt a horrible chilling sensation around her neck. She couldn’t tell if this was some nightmare, or if it was really happening. It seemed to last for minutes. Once she was fully conscious, everything stopped. She grabbed a rosary from inside a drawer, and prayed herself to sleep.

She recounted her experience to her husband the next morning. Hector was skeptical of the paranormal, but he took her back to Marcos’ shop. She told him what had happened. Marcos explained that on her previous visit, malevolent spirits may have caught hold of her, and followed her. Witch doctors believe the spirit of a deceased person can remain here on Earth. These spirits of evil beings are “damned,” and not allowed to step into the afterlife. They haunt places, and people, as well.

A spiritual cleansing might solve the problem, he suggested, but he was missing essential herbs. They were coming from Honduras. He told her to look for a spiritual leader, such as someone involved with the church, and ask for assistance in the meantime.

The couple spent the rest of their afternoon in downtown Fontana, and Maria experienced no paranormal activity.

The following day, Maria went to the Catholic Church she attended regularly. She spoke to a priest about her troubles, and he agreed to send someone skilled in these practices to her home. The next day, a priest named Father George arrived. He said prayers, and placed blessed rosaries, miniature figures of Saints and holy water around her apartment, claiming it would fight off the demonic spirits.

Everything seemed better from that day on. Maria returned to Marcos to receive a spiritual cleansing two days later, and she felt as if a huge weight was lifted from her. There were fewer strange occurrences in her apartment from then on. But she occasionally heard whispers, leaving her with the notion that the spirits were not gone. The whispers were of women, yet their voices were so low they were difficult to understand. Sometimes there would be laughter among those whispers. Sometimes groans.

At times she would continue to have frightening nightmares, in which ghosts pulled at her bed sheets and threw objects around the room. But this happened less frequently than before. Once she had her first child, she noticed that when she slept in the same bed with him, there was no paranormal activity. When she did not, she would occasionally hear the spirits whispering.

In 2007, five years after the paranormal activity began, the family moved to La Puente. Maria believed the spirits would remain in her old apartment, but they followed her. Now they would only whisper, and sometimes play with the doors of their new home, but they never disturbed anyone other than Maria. She was never harmed physically.

Today, years later, Maria continues to attend church and prays regularly. She is no longer in contact with Marcos, and the shop closed long ago. Her bond with Ivette remains strong, and the two see each other at least once a week. Though Hector has never experienced anything unordinary, he stands by her, and listens to her experiences.

Maria has come to live a happy life in America. She now has two sons. She takes them to school, and has them enrolled in swimming and youth football and guitar lessons. Maria works as a cook for Olive Garden six days a week.

Yet, as she does, she is fully aware that she remains haunted by the spirits.